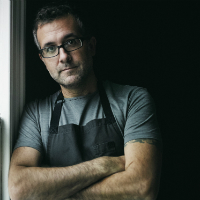 Chef Chad Sarno is co-founder of Wicked Healthy, whose mission is to drive culinary innovation globally with manufacturers, culinary professionals and retailers that’s free from animals. Additionally, Chad is co-founder and VP of Culinary at Good Catch Foods, creating “seafood without sacrifice" a 100% plant-based seafood line, launching in late 2018. He, along with his brother Derek, co-founded the Wicked Kitchen food line, offered exclusively in Tesco throughout the UK. Chad was formerly the VP of Plant-Based Education and Culinary Wellness at Rouxbe, the world’s largest online cooking school. Prior to this, he spent several years as Senior Culinary Educator, Global Healthy Eating Coordinator and media spokesperson for Whole Foods Market's Healthy Eating program. He was Executive Chef of SAF Restaurant brand launching the first international brand of vegan restaurants in Istanbul, Munich and London. He is co-author of the recently released THE WICKED HEALTHY COOKBOOK, packed with plant-based recipes that inspire their growing online community. Chad is also the co-author of the New York Times bestselling cookbook, Crazy Sexy Kitchen with Kris Carr, and contributing author to more than 10 health-related cookbooks. When not in the kitchen he’s getting lost in his gardens with his kids.