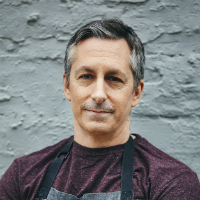 Derek is the co-founder of Wicked Healthy, LLC, with the mission to drive plant based culinary innovation on a global level.

Derek serves as Chef & Director of Plant-Based Innovation for Tesco PLC in the U,K. leading the company’s efforts to bring delicious, unpretentious Plant Based foods to market. Derek and his brother are owners and developers of the Wicked Kitchen brand.

Derek is also co-founder of Good Catch Foods, bringing sustainable Plant Based commodity seafood to the market, coming in 2018.

Prior to founding Wicked Healthy and partnering with Tesco, Derek served as the Senior Global Executive Chef for Whole Foods Market, and served as Culinary Director for WFM Conscious Leadership Academy.

Derek is a serial entrepreneur, founding several award-winning restaurants and food service companies in the United States. Derek also served as the resident Chef & Farmer at a Tibetan Buddhist monastery and retreat center in upstate New York. During his years at the monastery, Derek grew and cooked all the meals, and learned how to sit quietly. This time helped him become less of a jerk.

Derek is the co-author of the Wicked Healthy Cookbook and the Whole Foods Market Diet cookbook both with his brother Chad Sarno.