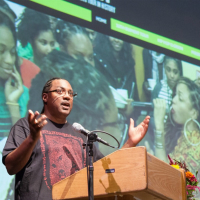 Hip Hop is Green is a pioneering movement led by a team of artists and performers that use the power and influence of Hip Hop to speak to youth and spark positive changes in their lives. Hip Hop is Green provides powerful, life changing programs for underserved, low income urban youth and their families. We are on the vanguard of the new trend of people open to health, wellness and discovering new products. Hip Hop is Green has worked with several plant based brands to introduce new communities to plant based food to date they have served over 7000 plant based meals to urban youth and families and established chapters all over the US and London. We are the pioneers in this new Green Age of Hip Hop and we make being healthy cool to youth people and families.

Mr. Keith Tucker founder of Hip Hop is Green came up with the original concept when he was interviewing vegan rappers on his Seattle radio show earlier in the decade. This introduction through music — and a culinary tour of vegandom at the Seattle VegFest –caused him to go vegan and further refine the idea that Hip Hop’s 9 Elements, beginning with the more familiar ones of DJ-ing, MC-ing, Graffiti Art, and Break Dancing, needed a 10th: Health and Wellness. On April 21. 2016, the 10th Element was officially inaugurated at a gala event in Harlem.